A static charge on an object will create an electric field. Learn to draw electric fields around single and multiple charges and solve for their value.

Electric fields are drawn to represent the way a positively charged particle would move if placed in a field represented by the a or multiple standing charges. 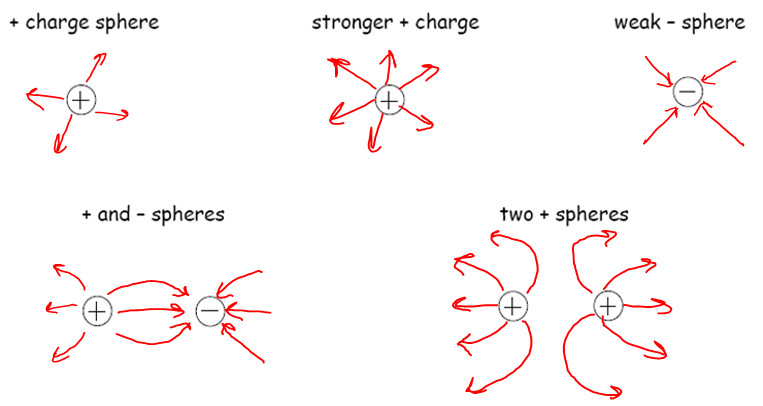 In these animations the fields are presented at the beginning of the animation.  Later a tiny positive charge moves in the field to show what the lines and arrows represent.

1. You pull a wool sweater over your head, which charges as it created friction with your cotton shirt.  What is the electrical field at a location where a 1.30 x 10-19 C- piece of lint experiences a force of 3.2 x 10-9 N as it floats?

(Click the picture to see a larger view of the work) 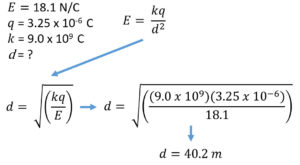 (Click the picture to see a larger view of the work)

When you have a conductive path around an object.  Shielding occurs because electrons (- charge) stay as far away from each other and stay on the outside.  Electrical fields balance out and on the inside there will be no electrical field.

This effect protects you from getting electrocuted if you are inside a metal car that gets hit by lightning.  People can wear conductive clothing surrounding their entire body and play with the phenomenon that is created with electrostatics and the current that would occur as charge is discharged.

Car Getting Struck By Lightning

When a car gets struck by lightning the current travels around the cars conductive outside and arcs to the ground.  Since the current is traveling around, the person in the car is safe and not experiencing the arc.  Remember that an arc is the lightning with the sound and light that you see and hear during a violent grounding through the air.

Current passes around the people wearing these suits keeping the individuals inside them safe.  Anyone outside the conductive suit on a Tesla coil would be in danger without and not shielded.