Learn about light coherence and alignment. Understand the electromagnetic wave phenomenon of polarization and diffraction.

White light that you see from a flashlight or the sun is incoherent with random patterns of all colors of light mixed.  Crests of these waves do not align crest to crest and trough to trough. 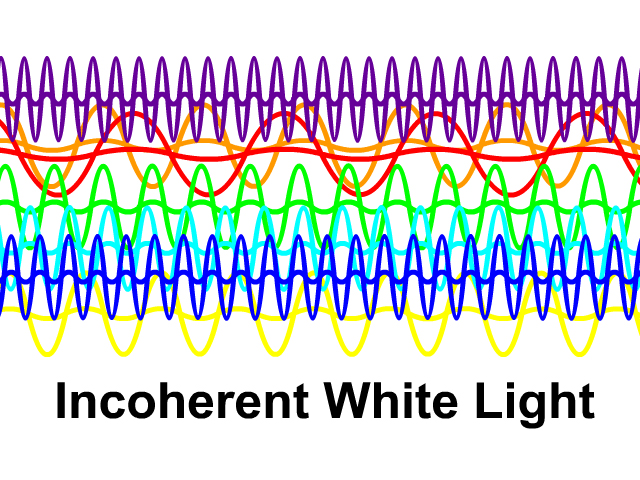 In the pictures below we use red light waves to see coherence.  Red light produced from a flashlight with a filter would produce incoherent red light.  The phases of the wave are random and don't line up. 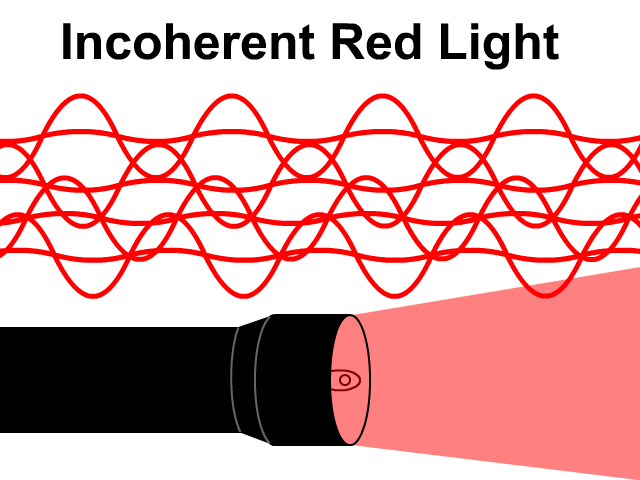 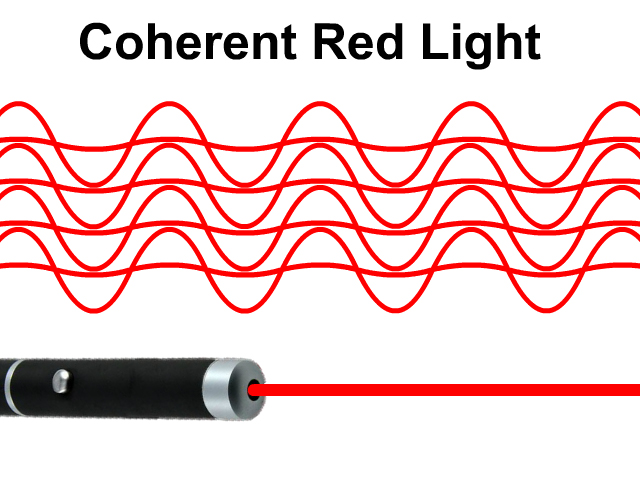 Light from a flashlight or the sun is unpolarized, aligning in many random polarization angles.  Notice how the alignment varies in the picture here.

When two sheets of polarized film are aligned parallel, similarly aligned light is allowed through both.  You see little difference than using only one film.

When two sheets of polarized film are aligned perpendicular, they will filter out all light.  You will not see through the film since they each filter out the light that the other does not.

1. Light from the sun has random alignment as it travels into our atmosphere.

2. As light hits the horizontal ground or another horizontal surface it becomes polarized horizontally.  We call this glare as it shines off the ground or an object ahead of you.

3.  Sunglasses are polarized vertically, not allowing horizontally polarized glare through.

Polarized sunglasses allow you to see the incoherent light reflecting off most objects around you while cutting out distracting glare.

1. Which Set of sunglasses would cut out horizontally polarized glare?

2. What would a person wearing the sunglasses labeled D above see when looking at horizontally polarized glare?

3. Why can you still see objects around you while wearing polarized sunglasses?

Most light around you is incoherent, in many different polarization alignments.   Vertically polarized sunglasses only absorb 100% of the horizontally polarized light allowing transmission of other alignments.

In this animation we follow five points from the initial wave with each of the five points becoming the source of a new wave.  In reality this occurring everywhere along the wavefront all the time and not just the five points pointed out by our model.

Diffraction is the property of a wave where it bends going around a corner or an opening, which has two corners.  Longer wavelength waves diffract more than ones of shorter wavelengths do.

In the visible light portion of the electromagnetic spectrum red, the largest wavelength of light, would diffract the most and violet the least. 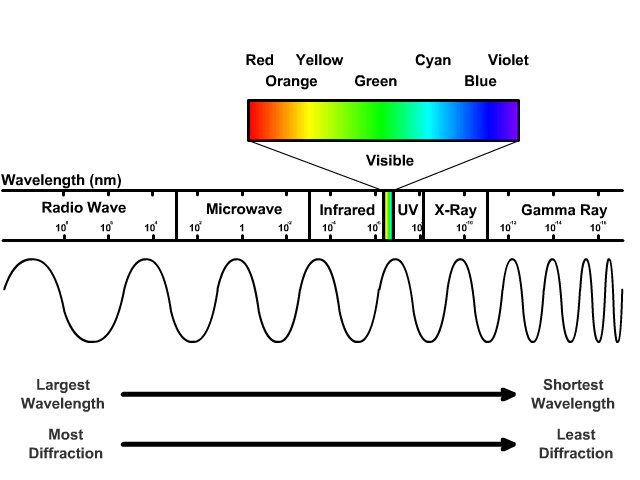 Wavelength is an important factor for determining the refraction after an opening.  The larger the wavelength of a wave, the greater the diffraction.

A wavefront is an area of a wave that is in the same phase.  The blue lines that appear after the aperture or opening in the animation represent wavefronts.

In this animation we break out three points and observe the diffraction occurring as they each act as a source of a new wave.

The largest central area of light in single slit diffraction is called the maximum.

Diffraction and interference leads to the pattern of bright and dark bands you see.

You can experiment with the single slit diffraction patterns resulting from color of light and aperture using the PhET lab at the bottom of this page. 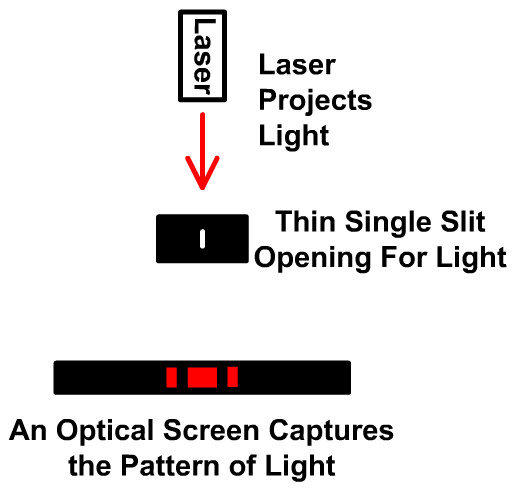 4. Would orange or green light diffract the most and why?

5. Would radio waves or orange light diffract the most and why?

Radio waves have a larger wavelength than green light, which is a color of visible light.  The larger the wavelength the more diffraction occurs.

Use the provided single slit diffraction patterns produced by a green and red laser equidistant to a single slit opening and optical screen which captures the projection.

6. The middle larger area of light in the single slit diffraction pattern seen in the image is called a maximum.  What is a reason why the red maximum is larger than the green maximum?

Red light has a larger wavelength and would spread further out because is diffracts more.

7. The brighter areas projected in single slit diffraction (labeled A in the image) are the result of what type of interference?

8. The darker areas projected in single slit diffraction (labeled B in the image) are the result of what type of interference?

Watch a Veritasium video on the double slit experiment here 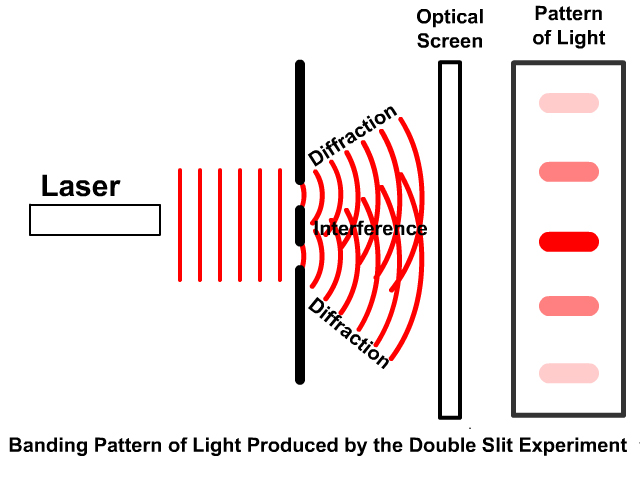 Trough the double slip experiment you see two of the four properties that all waves share.  Diffraction and interference results in the observed pattern of light.  Reflection of light can be seen anytime you look in a mirror.  Prisms and each water droplet of a rainbow act like prisms refracting and separating the colors of light.

Use the PhET Simulation also found below and on the PhET site following this link to study wave interference.