Here we look at Newton's three laws of motion starting with inertia, then force causes acceleration, and lastly action reaction pairs.  In this section we will look at the difference between mass and weight.  Then look at additional forces like air resistance, friction, and ones created on an incline plane.

The first law of motion is about inertia.  An objects resistance to a change in motion.  An object in motion stays in motion and an object at rest stays at rest.  So this the state of motion wont change unless acted upon by an outside force.

Force alone does not cause a change in motion if balanced by another.  When there is a non-zero net force an object will accelerate.

Once your done with the lesson do this for more practice:

Mass is determined by the molecular composition of an object.  Weight is a force created by the pull of an object towards another like the earth.  Learn the difference and see how to use the weight equation (Fw = mg) here.

No force in the universe is ever created without an equal and opposite reaction force.  Learn about action reaction pairs and the accelerations that result from these.

Air is made of particles.  The faster you go through air the more particles you hit creating an air frictional force opposing the motion.

When a rope is pulled an equal and opposite force called tension is created by the stretch in that rope.  See how to approach a variety of tension problems here. 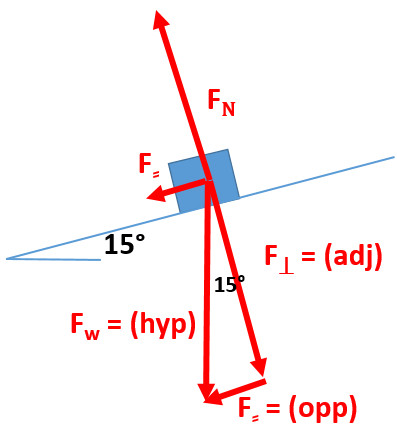 When you pull a spring a force is created in the opposite direction of the pull.  Hooke's Law (Fspring = -kx) relates the type of spring to the force required to displace it.

See all the forces section assessments all in one place.  Assess yourself to see if you are ready for your forces test.