Learn how an object would accelerate after force is applied and a frictional force is created. See how to use the force of friction equation.

Friction force (Ff) is a force caused because all surfaces are rough at the microscopic level.  Therefore a frictional force is created opposite to the direction motion will occur.  Static frictional force is equal to the force applied until a maximum amount and an object starts moving.  Once moving the object has what is called moving or kinetic friction.

Because moving surfaces are bouncing off each other with little less surface area interaction.

The Variables and Units: 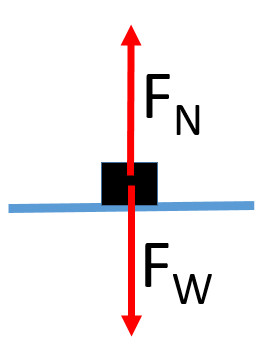 An object in constant motion has a net force is zero and with no acceleration.

If applied force was ever more than the kinetic friction 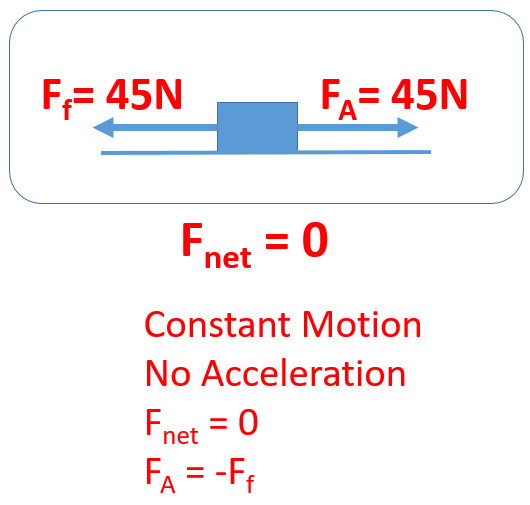 It takes 45N of force horizontally to move a wood block with a constant velocity across a desk.

1. What is the applied force?

Constant velocity means no net force or acceleration. See the picture below

2. What is the force of friction?

3. What is the acceleration?

5. What force is the minimum you have to apply horizontally to get a 1.5 kg block of wood at rest to move on a wood surface?

Minimum to move so up till its still not moving: use static friction

Note: I used 10 m/s2 for the acceleration due to gravity in this example

Find the force of static friction (Wood on Wood)

6. How much force would it take to keep the 1.5 kg block of wood moving at a constant rate after its moving?

7a. Would a 15kg brick on a wood floor accelerate when 120N of force is applied?

7b. What would its acceleration be?

8. If you lift the side of a desk creating an incline until the moment an object first starts moving. What would happen next keeping that exact same angle and why?

A. The block would stop

B. The block would move at a constant rate down the incline

C. The block would accelerate down the incline

( Choice C ) The block would accelerate down the incline

(See the animation of the forces interacting below)