Newton's Second Law of Motion: (Fnet = ma) All the net forces on one object cause it to accelerate if the net force is other than zero.

In a later section you will see that weight equals mass times acceleration (FW = mg).  If given mass (in kilograms (kg)) you must convert to weight (in Newtons (N)) using the 9.8 m/s2 acceleration due to gravity on earth.  On a horizontal surface normal force, the force the ground pushes back on an object is equal to weight and pushing up.  Weight (FW) is also the minimum force a person would have to apply to lift an object up once moving. 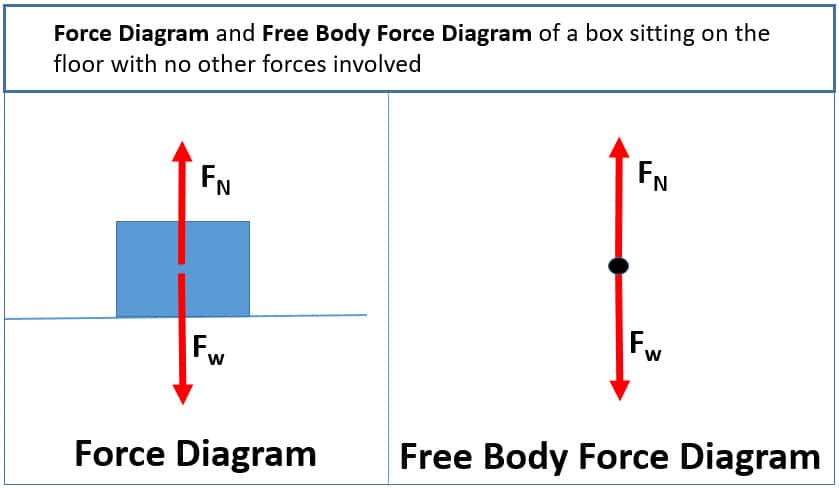 Newton's Second Law is simply stated as an equation:

You need to take into account all force vectors acting on an object (as seen to the right) and use the net force to determine the acceleration.

Note: If there is only one force mentioned in a problem then this would be your net force and the equation above is simply stated F = ma.

Acceleration is directly related to force.  A greater force gives you more acceleration.  When force goes up acceleration goes up.

Acceleration is inversely related to mass.  Look at the animation to the right.  When mass goes up acceleration goes down.

Problems involving the net force equation (Fnet = ma) often tie into one dimensional motion problems.  Notice in the picture to the right that you may have force and mass to solve for acceleration.  Later you may use this to find the final velocity or another unknown seen in the left side of the picture.

You may also have to start with the equations on the left.  Later you may use those to find a mass or net force causing that acceleration.

Making a givens list will help you determine how to proceed in a problem.

1. What is the net force and how much would a 2 kg object accelerate when you have a 12 N force right and 6 N force left?

Turn directions into signs (I'll call right positive for these when one dimensional: on the same axis)

Use the net force to calculate acceleration equation

2. What is the net force and how much would a 2 kg object accelerate when you have a 12 N and 6 N force both left?

Use the net force to calculate acceleration equation

Acceleration is always in the same direction of net force

3. What is the net force and how much would a 2 kg object accelerate when you have a 12 N force up and another 6 N left? 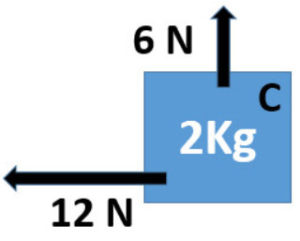 Since the vectors are in right angles so you have to follow these steps: 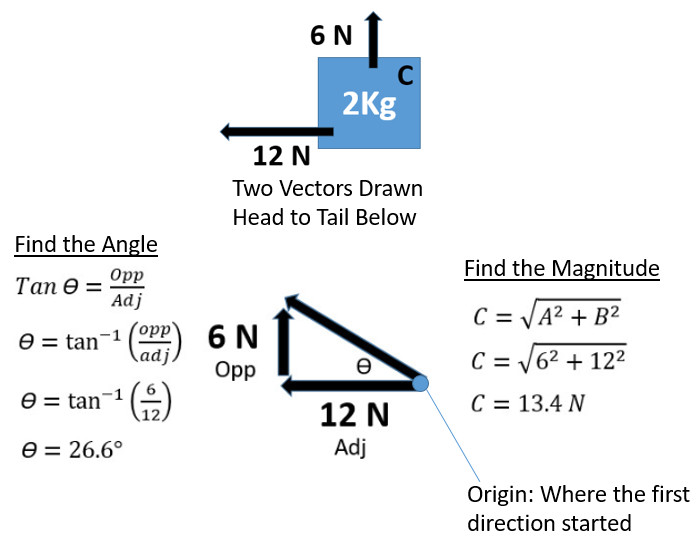 The resultant force would be 13.4 N 26.6° above the left horizon.  (There are many ways to describe the angle when not really defined as long as you have the baseline and an angle in a direction from it.)

You have force and mass and start by solving for acceleration so you can use it in a one dimensional motion acceleration equation.  Since there is only one force mentioned it is your Fnet.

The final velocity will be 8.8 m/s forward.

5. How much force is required to push a 6.5 kg shopping cart 10 meters in 3 seconds starting from rest?

Pick the right equation and solve

Now solve for the force required to accelerate a 6.5 kg shopping cart by 2.22 m/s2

When force is applied at an angle, only the force component in the direction of motion will directly accelerate the object.  The horizontal component, the adjacent side of the triangle to the right, will accelerate the 5 kg mass.

6. How much would a 5 kg box accelerate when a 75 N force is applied 25° above the horizon on the right side?

You would start by finding the adjacent side:

Then figure out the acceleration using Fnet=ma: 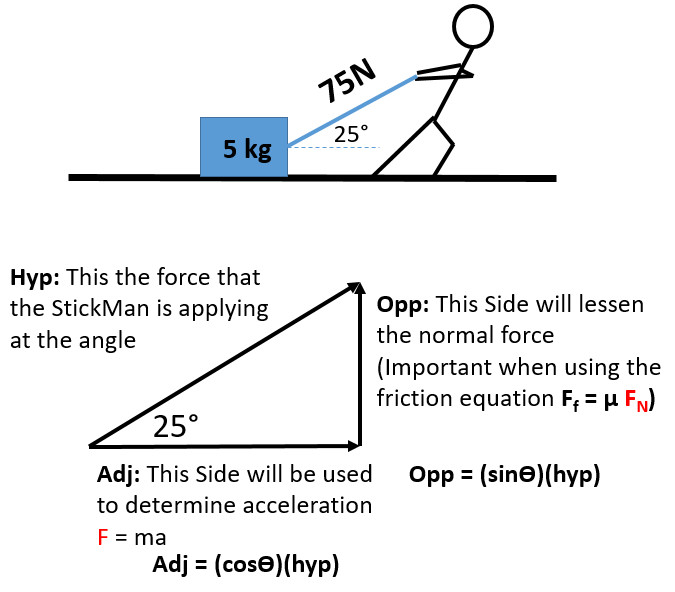 Normal force is the force the ground pushes up against the weight directed down created by gravitational force.  When pulling up at an angle, the vertical component of force will subtract from weight and normal force up.

Normal Force (FN) would have been 49 N without the pulling up component of this picture.

Now determine the vertical or upward component of the force: 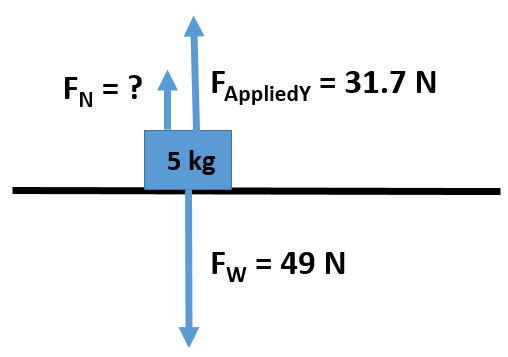 The normal force in this example must make the net force 0 in the Y axis since the box is not moving up or down.