The third law states that an applied force creates an equal and opposite force.

When you push a wall the wall pushes you with equal force but in the opposite direction.

In the picture to the fight the cart will accelerate more to the right while the force is applied since its mass is less. 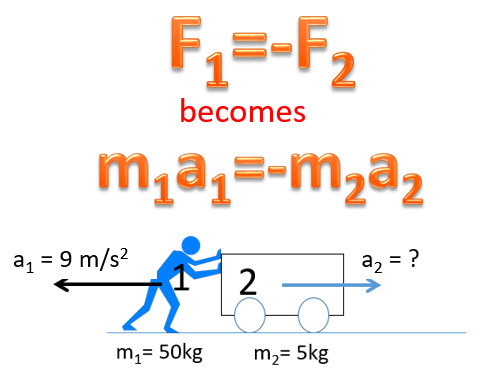 Newtons Third Law: Action Reaction Forces are the Same but Accelerations Differ Because of Mass

While Forces are equal the accelerations depend on the objects mass.

In the animation above, it was the acceleration which caused the but to smash  because its mass was so much less than the cars.

Acceleration is directly related to force.  So if one goes up the other does too.  If you push harder the object will accelerate more.

Acceleration is inversely related to mass.  So if one goes up the other goes down.  Pushing a 2000 kg real car will cause much less acceleration than pushing a 0.01 kg toy car.

What is the acceleration of a 45 kg boy that jumps off a 2 kg skateboard accelerating the skateboard 12 m/s2 to the right?