Tension or tensile force in a rope or stand that results from that object being stretched. See how to approach a variety of tension problems here.

Tension (FT) is the pulling force exerted by a strand (ie. string) in the opposite direction of a force applied. (Unit: N)

An object being lifted by a rope and is not accelerating creates a tension equal to weight.  No acceleration means the object is at rest in the air or in constant motion. 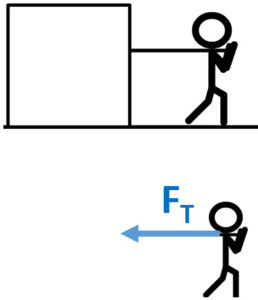 1. What is the tension in the rope necessary to lift a 150 N object constantly up?

Because constant motion means there is no acceleration so net force equals zero.  In order to have no net force the force of tension up must equal the weight down. 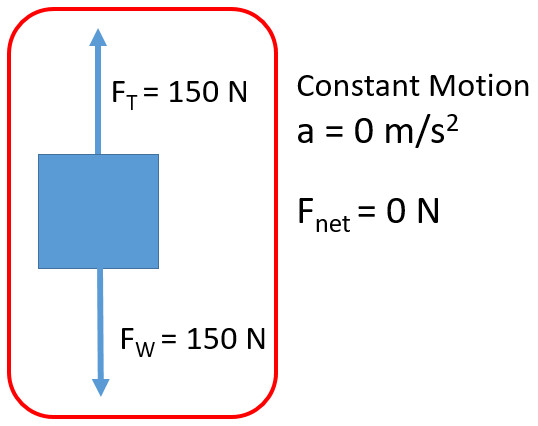 2. What is the normal force of a 15 kg object when on the ground and a rope with 50N of tension is pulling up?

Because the object is at rest the net force is zero.  The weight down is:

The force up must be equal since the object is at rest.

Sum of forces = 0 so force up must equal force down

Normal Force Up + Tension Up = Weight Down 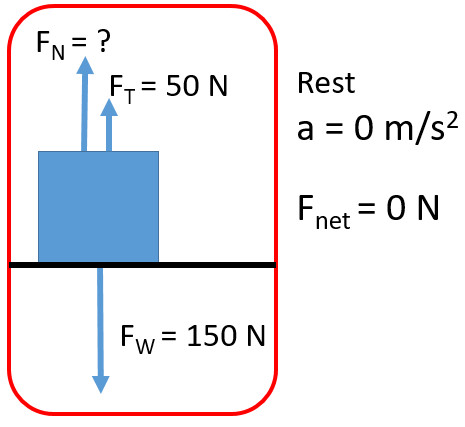 When there is one rope up all of the weight has to be supported by that one rope and the tension is equal to weight.

When there are multiple ropes all directed straight up each will support an equal amount of weight.  To find this you would divide the weight by number of strands.

3. Susie, who weighs 650 N, suspends herself from the monkey bars holding herself up with both hands horizontal.  What is the tension in each arm?

650 N total weight and two arms and the force is up opposing the weight down. 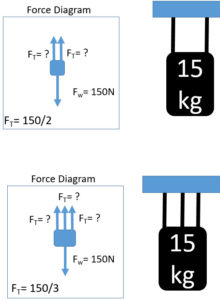 Divide by the number of ropes for tension in each when you have multiple ropes suspending an object vertically.

Tension at an Angle

As the angle from the vertical increases tension increases.  Tension is the most when the painting is at the highest point in the animation and the angle (Ө) is the most.

Calculating Tension When at Equal Angles

How to solve tension at an angle when at equal angles.

A. Figure what each rope has to lift vertically

B. Solve for the hypotenuse for the tension this individual rope

4. What is the tension in each of two ropes holding up a 9 kg mass at 35° from the vertical as seen to the right

Start by finding the weight which would be supported by the ropes:

Figure out what each of the ropes would have to support:

Each of the 2 ropes tension would be 88.2/2 = 44.1 N if directed straight up since they support the weight equally.

Figure out that the tension actually is:

Set a right triangle up with 44.1 N as the vertical and solve for the hypotenuse: 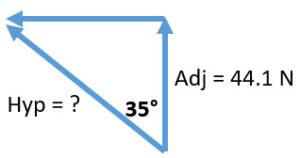 The tension in each rope would be 53.8 N 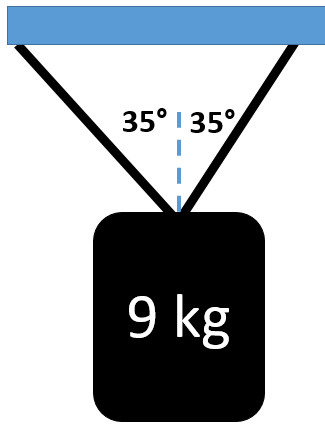