Magnetism is a physics phenomenon created by moving charge.  Two types of magnets include a permanent magnets and electromagnets.

Electric fields are created by static (not moving) charged objects

The fundamental property that creates magnetism is electrons spin.  We will stick to a classical physics description in this page as we envision a particle spinning.  Quantum physics envisions a electron having qualities between a particle and wave.  Without being "strictly" a particle, what we consider spinning may be some other function.  Either way, classical physics can explain magnetic phenomenon and classical physics models can be used to explain and predict.

An election spinning creates dipoles as seen in the electron model.  A dipole relates to the two poles, north and south, created by a spinning electron.  When a north and south pole is present, a magnetic field is created.

North poles and south poles are attracted to each other so in most materials electrons pair.  Pairing means the north pole of one is next to the south pole of the other.  Election pairing neutralizes magnetic properties created by an individual electron spin.

In magnetic materials that have dipoles:

Ferromagnetic materials are special types of metals where electrons spin the same direction called domains.  Domains maintain the dipole, north and south, and of the similarly spinning electrons.  The bar magnet in the model represents the dipole of the domain which is the same as each individual electron.

Iron, cobalt, and nickel are common ferromagnetic elements having domains.  Some alloys, which are mixtures of two or more metals, are also ferromagnetic.

The difference between a ferromagnetic material that is not magnetized or magnetized depends on domains being aligned.

The term "soft" can be used to describe ferromagnetic metals that do not easily remain magnetized.  Iron and nickel are soft, domains become unaligned, loosing magnetism when a magnetic field is removed.

The term "hard" describes ferromagnetic metals like steel and neodymium that keep domains aligned after a magnetic field is removed.

Unaligned Domains in a Ferromagnetic Metal

What is an Induced or Temporary Magnet?

What is a Permanent Magnet?

Domains Aligning in a Magnet

Ways to Demagnetize a Magnet

What Happens if you Break a Permanent Magnet?

Breaking a permanent magnet creates two weaker magnets.  The dipoles would be aligned the same direction as previously.  The opposite poles would be next to each other and attract.  See how the north of one piece is next to the south of the other it broke from.  The inherent cause of magnetism, electron spinning direction remains the same.

The earth itself is acts like a magnet believed to be caused by current in its outer core.  When a magnet is brought close to a compass the stronger local magnet field will interact with the compass.

A Compass Rotating in a Magnetic Field

The earths geographic north pole is an unchanging location where the earth's surface intersects its north rotational axis.

In some texts, the earths magnetic north is defined by the location where a compass north, if held directly above it, would point directly down.

A compass north will take you close to the north geographic pole.  Depending where you are located the angle between the geographic meridian north and where a compass points north (magnetic meridian south in our image) will be different.  The slight angle difference from where the compass says is north and geographic north is called the magnetic declination. 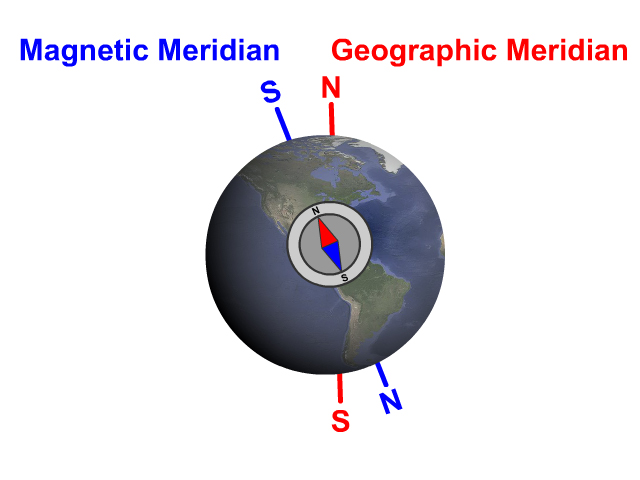