Collisions and Conservation of Momentum

Momentum is conserved in a system. See how the conservation of momentum equation is applied to elastic and inelastic collisions.

The more massive an object or faster object has more momentum as seen in the equation.

The momentum of objects interacting get conserved.  Many scenarios are covered in this section and many examples will represent interaction on a frictionless surface.

When a player throws a baseball, both the player and baseball start from rest.  A baseball player throwing a baseball gains an equal and opposite momentum to the baseball thrown.  In reality, friction keeps the player in one place after the throw.  In space, a player would accelerate backwards every throw.  The amount of acceleration is not as much since the baseball has little mass compared to the player.

Notice when objects are together the combined momentum is a single velocity times their masses added together.

2. A 95 kg pitcher at rest throws a 0.15 kg baseball 40 m/s to the right.  How fast would the pitcher be going after the throw on a frictionless surface? 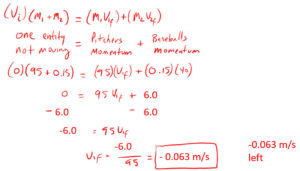 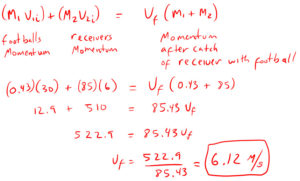 In elastic collisions, objects colliding's shape remain unchanged and do not stick together afterwards.  Conservation of momentum is conserved and kinetic energy is conserved and no heat given off.  Two pool balls colliding on a pool table is an example.

4. A 0.1 kg pool ball traveling 2.5 m/s hits another 0.1 kg at rest.  If the first ball stops after the elastic collision, how fast is the second now moving?

5. A 0.05 kg dart traveling 16 m/s hits a 0.15 kg movable target and sticks to it.  How fast is the dart in the target moving together after the collision? 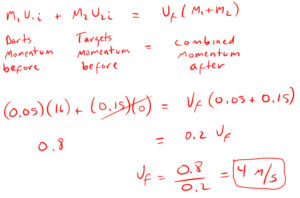