Radioactive elements goes through decay at different rates. The time it takes for the element to degrade by half is called a half-life. Learn more here.

Half Life of Common Radioactive Isotopes

A half-life is the time it takes for half of the radioactive sample to decay. 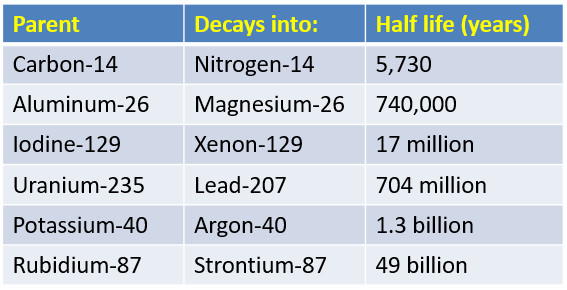 Radiometric dating is a process of determining the age of an object by the amount of radioactive isotope that has degraded from an initial sample.

Carbon-14 is a radioactive form of carbon used for radiometric dating of once living organisms.

Carbon-14 has a half-life of 5,730 years.  All life molecules have Carbon, testing the amount of radioactive carbon present in a sample can determine its age.

An archaeologist that tests a bone and finds it has half the normal amount of radioactive carbon-14 just determined its age is 5,730 years old.

We will work through a few sample problems on this page using a table form and the following equations. 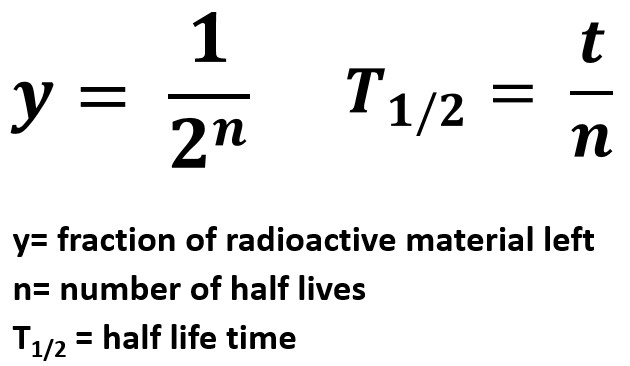 A. How much of the original radioactive material remains after four half-lives?

Second: Multiply the fraction by the original sample size

Using a table to answer example A and B above

#1 Make a table as seen below starting with 0 half lives and columns for any necessary information.  Fill in one in this column if asked about a fraction, fill in 100% if asked about a percent.

#3 The completed table here could be used to answer questions about the fraction or sample remaining for up to four half-lives of a 56 gram sample.

D. A 100 gram unknown radioactive material has a half-life of 4000 years. How many grams of the radioactive sample will remain after 20,000 years?

Step 1: Determine the number of half-lives

Step 3: Multiply the fraction by the original sample mass

Note: You can use a table or math for any of the following examples

1. What percentage of radioactive substance remains after ten half-lives?

Multiply by 100 to get a percent from a fraction

2. If a substance starts out with 400g, how much remains after five half-lives?

Make a table and cut 400 grams in half five times

3. How many complete half-lives have occurred if 12.5% of the original radioactive material remains?

4. How many complete half-lives have occurred is 18.75 grams of an originally 600 gram radioactive substance remains?