Acceleration Due To Gravity

When a projectile is in the air, under ideal conditions, it accelerates at 9.8 m/s² down.  Because of this the velocity changes by 9.8 meters per second every second in a downward direction. So watch how the 9.8 m/s² down never changes but the velocity constantly does because of it.

Note: Many classes use 10 m/s2 down because it is 9.8 m/s2 down rounded and is easier to conceptualize.  So continue to use what your teacher tells you to. 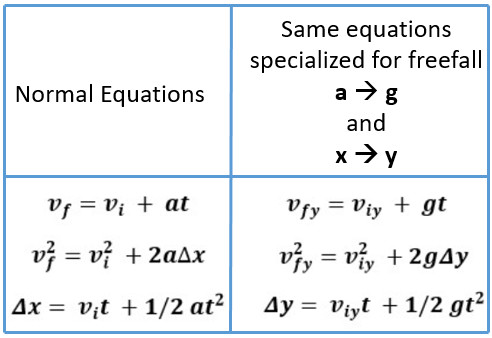 Working Through an Acceleration Due to Gravity (Freefall Problem)

When you read a problem that has an object thrown, dropped, or rolled off a table the object will be in freefall. Freefall does not mean it fell to get in the air but is only under the influence of gravity.  In later units we will encounter air resistance but unless you are told otherwise assume an ideal condition with no air resistance.  When you read a problem and the object is in the air as a projectile (just under the influence of gravity), the acceleration will be 9.8 m/s2 down.

Example Acceleration Due to Gravity Question:

Jose dropped a ball from a height of 15m from rest, how fast was it going before it hit the ground?

How fast is a ball moving when falling from rest and hits the ground 1.5 seconds later?

What is the displacement of a ball that is thrown up at 15 m/s one second after thrown?

What a Constant Acceleration of 10m/s2 Down Does to Velocity

Observe the two animations below of a = 10 m/s2 down or changing velocity by 10 m/s down every second.  The one on the left is of a ball thrown up at 10m/s, the next dropped from rest, and the last thrown down at 10 m/s.  On the right you see a ball dropped and another thrown down at 10 m/s.  The ball on the right is always going faster down and therefore covers more meters per second.  Notice how the two keep on getting further apart.

Acceleration Due to Gravity Quiz