Acceleration: Change in Velocity Over Time

Acceleration is describing how velocity changes. Learn more about acceleration and picking the right equation used in physics problems.  In the next lesson we will cover the acceleration due to gravity.

With change in velocity expanded out below:

The following acceleration equations can be used to answer any accelerated motion problems.  Observe the variables in our animated videos.

Final velocity equals the initial velocity plus the acceleration times the time.  Common version of this equation can be seen below.

Once you determine an object is speeding up or slowing down in a problem and you are given three variables and one to solve for,  you know you have to pick from the acceleration equations.

Example question as you walk through the steps.  How fast was Chancellor running after starting from rest and accelerating at 4.5 m/s2 for 2 seconds?

1.  How fast is Tommy Running after starting from rest and accelerating at 2 m/s2 for three seconds? 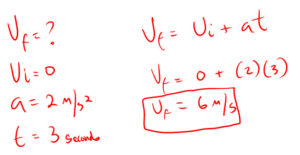 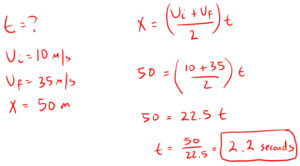 3.  How much did you accelerate when starting from rest and traveling 230 meters in 15 seconds? 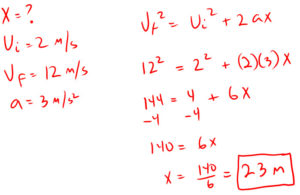