Work through Angry Birds projectile motion questions using our screen measurements.  Then have a little fun observing angular projectile motion playing the game found at the bottom of this page.  We'll be mathematically confronting this in our next section.

Angry Birds is a popular projectile motion based franchise produced by the Finnish company Rovio Entertainment.  In 2016 they made their way into their first movie and in 2020 into this physics lesson.

I measured out a few things using the game so we can solve problems related to projectile motion.

I first shot a bird horizontally and timed how long it took to hit the ground.  Since the Y-Axis component of velocity is independent of the X-Axis velocity component.  It did not matter how fast forward the ball was launched, only that it was shot horizontal.  It took 1.2 seconds to hit the ground and fall the height I measured next.

Q1: How high from the ground is Red if it takes 1.2 seconds to hit the ground when horizontally launched on Earth?

Height (Y) the Bird is Launched From

Note: Most web pages are adapted to the device and screen size changed from one device to another.  Either use all your measurements or all mine in any calculations.

I measured my screen and found that the height (Y) of the drop on my screen was 1.45 cm. 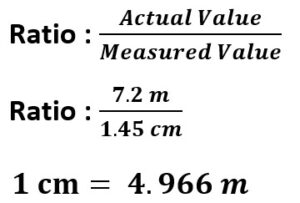 I measured the distance downrange (X) and found that to be 14.2 cm.

Q3: How far does Red actually land downrange when he lands 14.2 centimeters away on my screen? (use the earlier conversion from Q2)

Q4: What actual velocity is Red flung horizontally if he landed 70.5 meters from the base of the slingshot while falling 7.2 meters on Earth? (Solve this from scratch not using the previous given for time)

Q5: How long would Red take to hit the ground 7.2 meters away if flung at 100 meters per second horizontally on Earth?

Now that you have studied the projectile motion, see if you have mad angry bird skills!  Try the game out below.