Electrostatics involves forces between charged objects. Learn about charging by conduction, induction, and friction along with an intro to electrostatics.

Electrostatics is the physics that deals with the interactions of static (non-moving) charges.

In a later unit, we will study current which relates to phenomena created by moving charges.

What is the difference between static electricity and current?

Static electricity involves charged objects that are static, which means not moving.  Static charged objects create an electric field that interacts with other charged objects around it.  When there is a consistent supply of electrons (negative terminal) and another area for those electrons to flow (positive terminal) you get a current.  A current is a flow of electrons.  They don't flow as directly as our animation here but that is a lesson for a future unit.  While a static charge creates a electric field a moving charge or current creates a magnetic field around it.

Lightning is the result of clouds charging and positive and negative strike lightning is a result of grounding that charge.  Learn more about lightning here.

Atoms are composed of a nucleus and electron orbits which are regions electrons will most likely occupy.  The following table shows the mass and charge of a proton, neutron, and electron.

In the nucleus you find protons with a positive charge and neutrons that are neutral (no charge).  The nucleus is held together by strong nuclear forces.

Every atom comes with one negatively charged electron for every proton that balances the charge of the nucleus.  Electrons can be shared through covalent bonds with other atoms to become stable.  A stable atom has its outer election shell "or energy level for a defined number of electrons" filled.

The periodic table can be referenced to determine how many protons and electrons an atom has.  This can be used to determine if it is stable, how reactive it is, and what it will react with to become stable.  For this unit the is is important to note that electrons move around readily while protons do not.  When an object becomes negative it has gained more negative electrons than protons.  When an object becomes positive is has lost electrons.  For every object that gained electrons and became negative another lost them and is equally charged positive.

Different materials have a different affinity for electrons.  Some hold on to their electrons tighter than others. 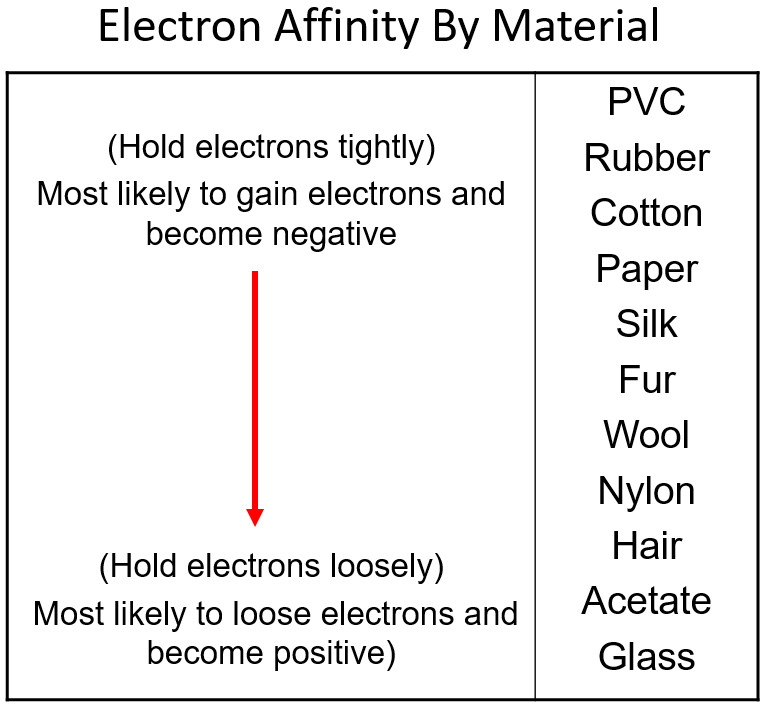 Objects will less affinity for electrons will loose electrons to ones with greater affinity when rubbed together.  Friction causes electrons to get bumped out of place with the object that holds them stronger gaining more.  The more electrons gained, the more negative the charge.  The object that lost those electrons will be equally positive.  The net of the two objects will still be neutral.  An electron has a charge of -1.6 x 10-19 Coulombs.  You will use this value when problems give you a number of electrons and rather that a charge in an electrostatics problem.

1. Does your hair or plastic comb have a greater affinity for electrons? Why?

The plastic comb has a greater affinity for electrons.  This is because it gained electrons after the friction of combing your hair knocked electrons out of place.

2. Assume your hair and comb were all neutral before combing.  What is the charge of the comb afterwards?

number of electrons gained x charge of an electron

3. What is the charge of your hair afterwards?

Your hair would have lost the electrons and become equally positive

number more protons than electrons  x charge of a proton

You would not do any math after question 2 since you know you hair became equally positive.  It looses the same amount of electrons and now has that many more protons than electrons.  This makes is the same charge but positive.

Electrical conductors are materials through which electrons move freely.

Why are metals good conductors?

Metals are good conductors because of how they share electrons.  Metals have a framework of atoms with some loosely held electrons that zip around shared by the metal.  This is what many physicists call an electron cloud as seen in the animation.

When two similar conductors come in contact, electrons separate as much as possible.  The net effect is that the two similar conductors will share the original charge.  Observe how charge would be shared in our unique animation.  Object one shares its charge with initially neutral object two after contact.  Now charged, object two continues ahead and equally shares its charge with the next once neutral object.  Each time there are two objects sharing charge so the previous charge was divided by two.

Electrical Insulators are materials that do not let electrons flow freely.  Insulators would be used for wire coatings or protective gloves for electricians.  You can plug a device into the outlet without getting electrocuted because the wires are insulated as the one in this picture. 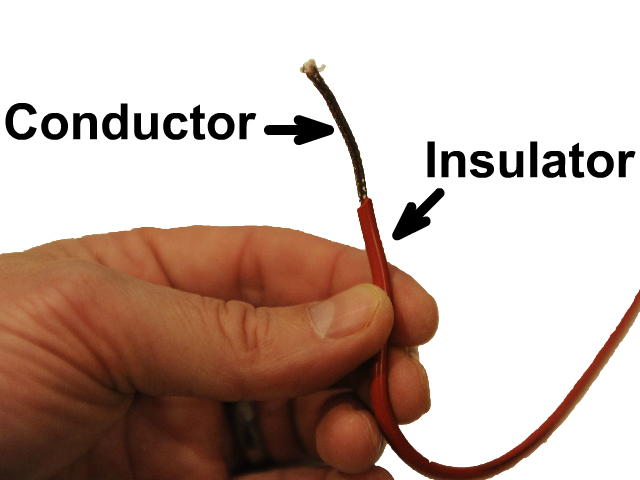 You can induce a charge in a neutral object by moving a charged object close to it.  Induction creates a temporary and opposite charge in that other object with no contact.  This is considered temporary because no electrons are transferred and neutrality returns when the close charged object is removed.

Charge When Charged By Induction

Conduction occurs on a neutral object when a charged object is in contact with it.

Charging by conduction is considered permanent since electrons move to the new object until that object is grounded.

Charge When Charged By Conducted

Models of Induction and Conduction Side By Side

In the model of charging by induction, protons are left in the model.  Protons will always be there but models are meant to be simple.  When electrons are repelled and move away while protons remain.  This leaves the closest side positive.  There is no contact, the negative induces a positive, and its temporary.  It is temporary because electrons do not transfer to or from the object charged.

In the model of charging by conduction, protons were left off.  Once again, protons are there but models are made to see just what is important.  A negatively charged object has electrons that are transferred to the other object.  This makes the other object have extra electrons and become negative as well.  There is contact, the negative conducts a negative charge, and it is permanent.  Permanent because electrons do transfer and stay on the newly charged object.

Induction then Conduction of an Electroscope

An electroscope is a composed of a conductive top sphere with a conductive path to the inside of an Erlenmeyer flask with two conductive light sheets of metal in close contact.  When the leafs are charged they separate.  The animation here starts with induction as the charged PVC pipe comes close and electrons on the electroscope sphere move away.  As soon as contact occurs there is conduction, electrons leap off a charge object making it negative as well.

Grounding is the removal of a charge by producing a conductive path to the ground.  The earth both accepts and gives electrons to neutralize objects.

Lightning is a form of grounding and on a lesser scale the same thing happens when you shock someone creating the arc (light of the lightning) and a bit of noise.