Series Circuits and Rules (Click Here to Go to the Lesson)

A series circuit you have no branches, current has only one path to follow.  The same current remains together through all components from the positive terminal and back to the negative of the battery.

Parallel Circuit Rules (Click Here to Go to That Lesson)

In a parallel circuit you have branches, multiple paths to follow.  So current splits up but later comes back together as it returns to the battery.

You can use Ohm's Law (V=IR) at a single location the same as above in series circuits.

Follow the current from the positive terminal of the battery in the animation.  Some parts of the circuit are in series and some in parallel.

Solving A Complex Circuit For Resistance

When solving for the resistance in a series circuit, the goal is to break down all the different parts making act like one single series circuit.  Follow the steps or our example as we do this.

1. Solve for the total resistance of the complex circuit below. 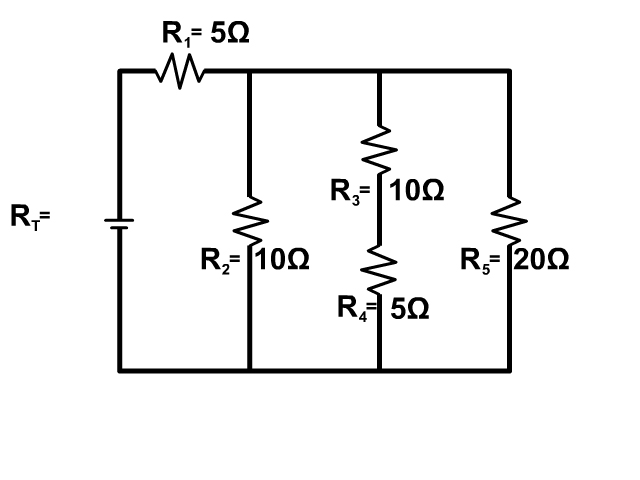 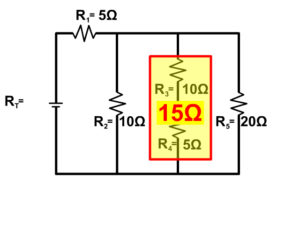 Now take resistor 2, the equivalent from resistor 3 and 4, and resistor 5 which are all on branches and put them together following parallel rules.  In this case RT will be the equivalent of these three branches. 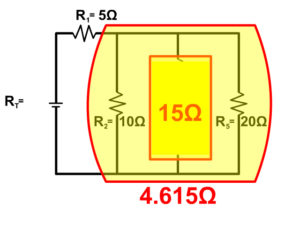 Current must flow through the 5Ω resistor and 4.615Ω resistor equivalent so they act like they are in series together.  Use series rules to put these together. 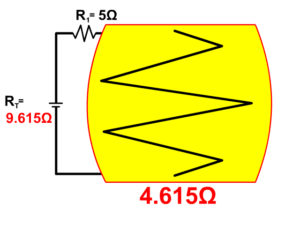 2. Solve for the unknown components of the following complex circuit. 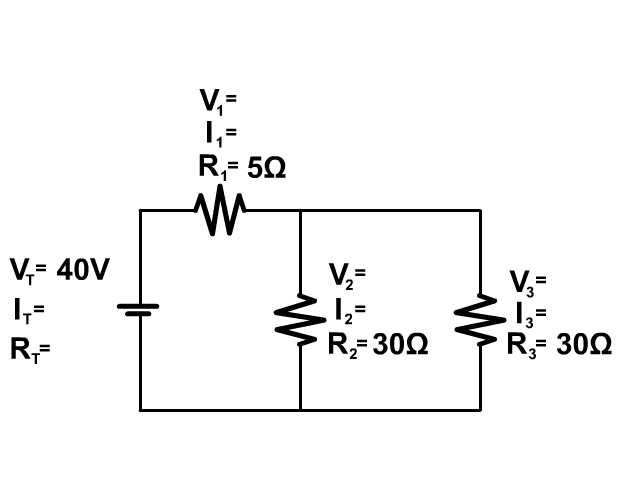 Combine Resistor 2 and resistor 3 in parallel 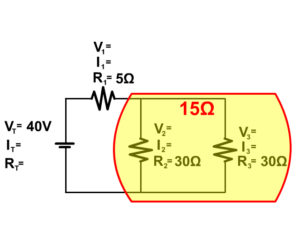 This is the resistance of the circuit placed at the battery.  We used and no longer need the equivalent or resistor 2 and resistor 3 so you will see that equivalent dropped off the next step. 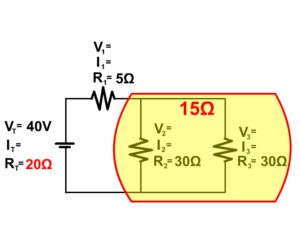 Now solve for current at the battery using Ohm's Law 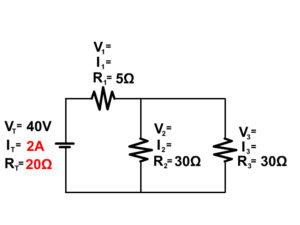 2A of current flows from the battery and does not branch before resistor 1.  This make resistor 1 have the same current 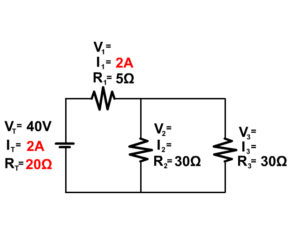 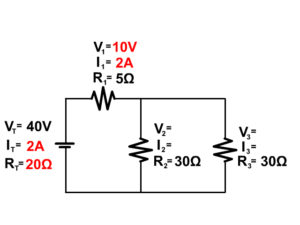 The 10V is dropped crossing the first resistor leaving 30V for the rest of the circuit.  In parallel the voltage left will be dropped all and equally on both the branches which have resistor 2 and resistor 3

The parallel rule we followed was this: 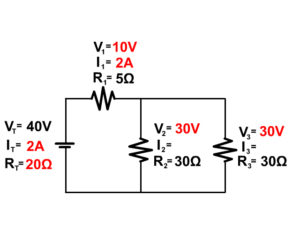 Now we can use Ohm's Law to finish this problem off

At both resistor 2 and resistor 3 you would do the follwing. 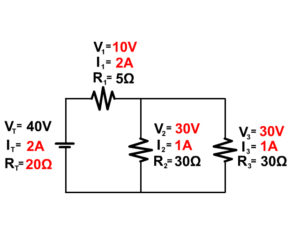 For our final check we can see that the 2A of current from resistor split mathematically correct and know we are right.

3. Solve for the unknown components of the following complex circuit. 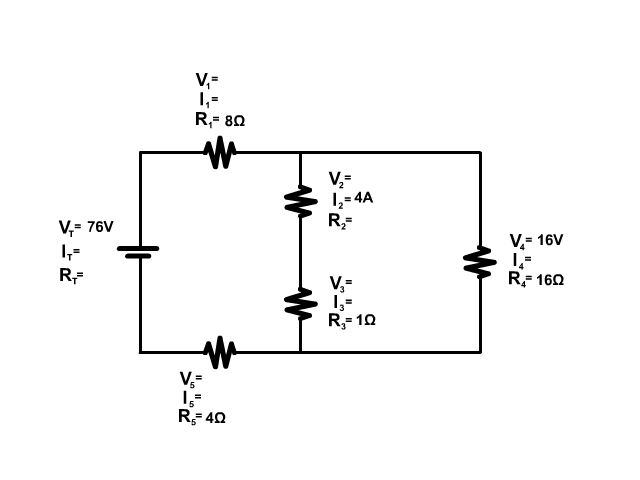 Use Ohm's Law to solve for the current at resistor 4 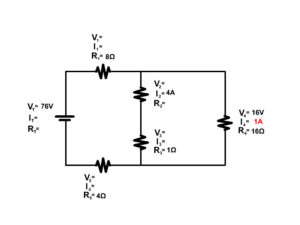 Resistor 2 and resistor 3 are in series.  In series current is equal 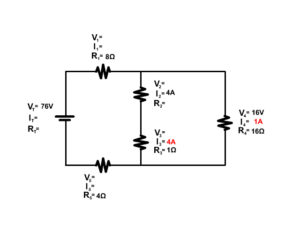 Now use Ohm's Law to solve for the voltage drop of resistor 3. 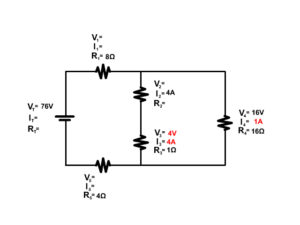 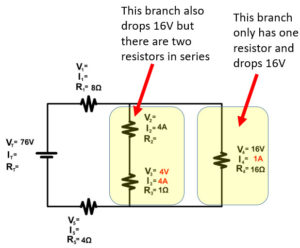 Therefore the voltage drop at resistor 2 must be 12 V since V2 and V3 dropping an additional 4V must add to the 16V of the other branch. 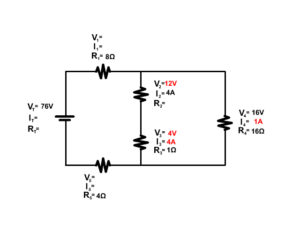 Now you can use Ohm's Law to solve for the resistance of resistor 2. 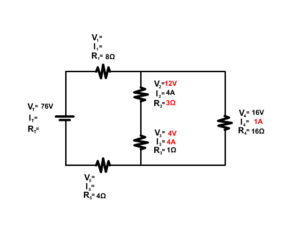 So the total current that split off coming from resistor 1 was 5 amps.

The battery and on the other side resistor 5 are also in series so they will be 5 amps as well. 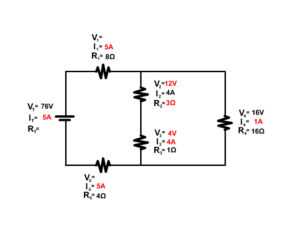 Now do Ohm's law to determine voltage drop at resistor 1.

and Ohm's Law for the voltage drop at resistor 5 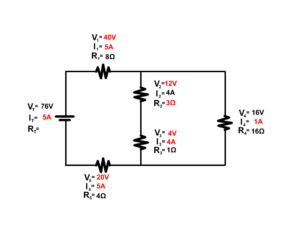 Lastly do Ohm's Law to determine the resistance of the entire circuit at the battery. 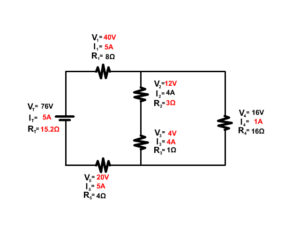 Click on the picture below to see the animation of current flowing.  This is for understanding of the final answers for current.