Universal Gravitation and the Equation

Learn how to use Newton's Law of Universal Gravitation. The force of gravity a weak force resulting from two objects having mass and the distance between them.  Universal gravitation is not just planetary but attracts you to everything around you as well.

Isaac Newton had a lot of brilliant ideas in his lifetime and a massive one was universal gravitation.  Universal gravitation is not just the fact that objects on earth fall to the ground.  His big idea was that all objects in the universe attract all other objects.  An apple may or may not have hit him in the head to cause this revelation.    While the apple is probably not true it's not far from the point.  Isaac Newton questioned two things.  Why would object on earth fall to the ground while the moon continued in its circular path?

The Moon and Apple Both Fall

Newton realized that both the apple and moon are really falling.  The earth follows the rules of the rest of the universe.  The apple is starting from rest and being attracted to the ground.  The moon has inertia which normally would make it continue forward but the attraction to the Earth makes it fall.  The combination of forward motion and falling gives the moon its orbital path around the Earth.

One way to analyze the force of gravity equation, place a 1 in for everything representing no changes.  Then change the one thing you are trying to analyze to a bigger number 2 and see what happens.  The rule of ones (click here) is a more detailed way to see how multiple changes alter force.

Force of Gravity Relative to Mass 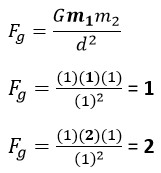 Force of Gravity Relative to Distance 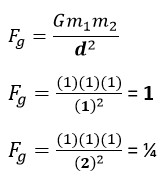 When you change out distance, the force of gravity of 1 becomes ¼.  This is not just smaller (inversely where 1 would become 2) but inverse squared 1 becoming ¼ with a much greater effect.  The force of gravity is inversely squared related to distance.

Notice what the distance the masses apart does to the force.  The distance apart of two masses is inversely proportional to the square of the distances (inverse squared).  Observe how the graph line is not straight but cured because the biggest drops in force occur early.

You need to be able to rearrange the universal gravity equation to solve for a mass or distance between objects.  Our animations on the right show the process.

Example 1: What is the force of gravity between the earth and the moon? 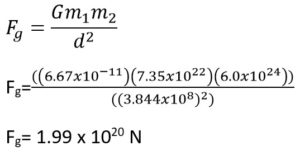 Example 2: How much will the force of gravity change if you double one mass and quadruple the distance?

Follow the link back to the Rule of Ones lesson to see why we did what we did here.

Additional Problems Including Solving for a Mass and Distance

(Click Here to See All Problems and Solutions Above) 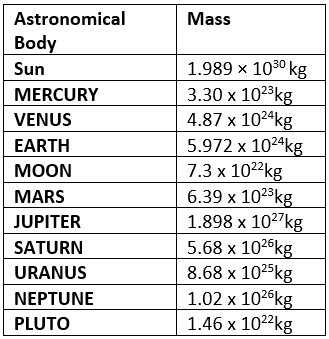